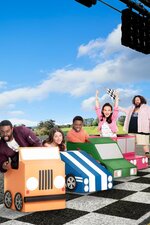 Just Roll With It

This sitcom follows the lives of two fun-loving newlyweds and their preteen stepsiblings, polar opposites who must now somehow learn to be harmonious siblings. While the setup may sound like an all-too typical family comedy, that's where the similarity ends and the hilarity begins. At numerous points in each episode, the scripted high jinks are interrupted by the sound of a foghorn. As the actors retreat backstage, the studio audience uses electronic devices to select which of three comedic scenarios they would like to see take place next. Votes are cast, the crew quickly resets, and the actors return to the stage to "Just Roll With It," relying on their improvisational skills to move the story along and hopefully generate laughs in the process. Succeed or fail, the unpredictability inherent in the show's "can they pull this off" element certainly makes for an interesting twist on the traditional sitcom.