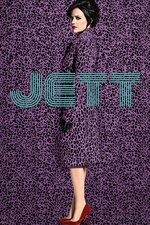 Jett is now available to stream and watch online:

"Whoever says crime doesn't pay is doing it wrong." Such is the slogan of world-class thief Daisy "Jett" Kowalski. Fresh out of prison, Jett's retirement plans don't last very long when powerful crime lord Charlie Baudelaire offers her one "final" task in Cuba. The scheme not only reunites Jett with a former flame but sets off a chain of unexpected events that endangers everyone she cares for and pits her against ruthless criminals determined to exploit her skills for their own ends. Carla Gugino, best known for her action-filled turns in the "Spy Kids" film franchise, stars as the reluctant title thief.