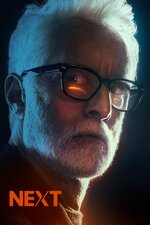 Silicon Valley pioneer Paul LeBlanc discovers that one of his own creations -- a powerful A.I. called NEXT -- might spell doom for humankind, so he tries to shutter the project, only to be kicked out of the company by his own brother, leaving him with nothing but mounting dread about the fate of the world. When a series of unsettling tech mishaps points to a potential worldwide crisis, LeBlanc joins forces with Special Agent Shea Salazar, whose strict moral code and sense of duty have earned her the respect of her team. Now, LeBlanc and Salazar are the only ones standing in the way of a potential global catastrophe, fighting an emergent super intelligence that, instead of launching missiles, will deploy the immense knowledge it has gleaned from the data to recruit allies, turn people against each other and eliminate obstacles to its own survival and growth.