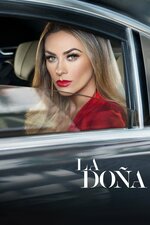 La Doña is now available to stream and watch online:

Altagracia is a powerful woman who becomes ruthless, nicknamed the "man-eater." Altagracia will not rest until she finds each of the men who murdered her parents and raped her. As a result of this rape, Altagracia has a daughter, Monica, whom she isn't able to raise because she is a constant reminder of the terrible act that marked her life. But destiny will reunite them, when they both fall in love with the same man: Saul Aguirre, an incorruptible defense attorney, who fights against women's violence. He becomes Altagracia's obsession and she competes with Monica for his love, unaware that Monica is her daughter.