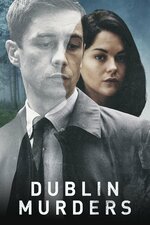 Dublin Murders is now available to stream and watch online:

Detectives Rob Reilly and Cassie Maddox find themselves dispatched to investigate the murder of a young girl on the outskirts of Dublin, Ireland. Based on the books "In the Woods" and "The Likeness" by American-Irish writer Tana French, this psychological thriller features a cast of mostly Irish actors, including Killian Scott and Sarah Greene as the leads. The series follows the detectives, who put their friendship to the test, as they are pulled deeper into the intrigue and darkness that surrounds the case.