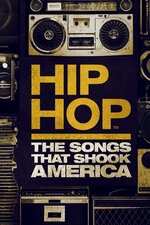 Add to my Watchlist
Find out where to stream and watch Hip Hop: The Songs That Shook America at the American Streaming Guide

From executive producers Ahmir "Questlove" Thompson, Tariq "Black Thought" Trotter, Shawn Gee and Alex Gibney, each episode of this series focuses on a groundbreaking song pivotal to the evolution of American music and culture. From the early hip-hop battles to verses that sparked hope and inspired change, watch artists deconstruct their composition, revisit the impact the song had on them personally, and dissect the socio-economic and cultural conditions that inspired the landmark work and gave voice to a generation.