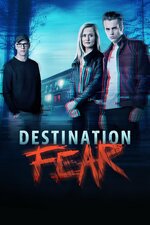 Destination Fear is now available to stream and watch online:

In Travel Channel's "Destination Fear," documentary filmmaker Dakota Laden, his sister, Chelsea, and his best friend, Tanner Wiseman, travel across the country in an RV to spend nights in haunted locations. From asylums to prisons, they explore abandoned buildings using scientific equipment to capture evidence of paranormal activity. At each site, the luck of the draw determines where each one of them will sleep -- alone and separate from each other -- armed with cameras and dread as their only companions. Episodes include a visit to Brushy State Penitentiary, which is rumored to be rife with paranormal activity. At Old South Pittsburg Hospital, Dakota prepares sister Chelsea to confront a specter that attacks only women. In West Virginia, the team visits Sweet Springs Sanitarium, the site of a massacre of Native Americans, where they hear screams, voices and chants. They also revisit St. Albans Sanatorium, even though Chelsea has vowed she would never return to this awful place.