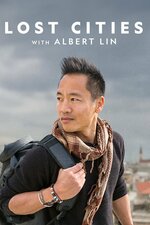 Dr. Albert Lin embarks on a high-tech adventure to revolutionize archaeology, utilizing ground-penetrating radar, LiDar and 3D scanning. Lin is an a National Geographic Explorer, an award-winning scientist, a technologist, and an adventurer with a knack as a storyteller for resurrecting legendary cities still hidden beneath the earth. In "Lost Cities With Albert Lin," he joins boots-on-the ground archaeologists to discover unexcavated civilizations. Lin attempts to locate the headquarters of the Knights Templar in Acre, Israel. He looks for the fabled city of El Dorado in the jungles of Colombia. His adventure takes him to the archaeological site of Waqrapukara in the Peruvian Andes. In the United Kingdom, he explores the Mesolithic site of Blick Mead, near Stonehenge, to perhaps find out why one of the world's most famous monuments was built. The six-part global series sends Dr. Albert Lin on a mission to uncover and resolve mysteries at the most extraordinary sites of antiquity.