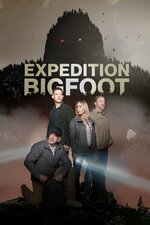 Every year hundreds of eyewitnesses record alleged encounters with Bigfoot, a legendary cryptid described as being a large, hairy, bipedal apelike creature. More than a third of the sightings come from the Pacific Northwest. In Travel Channel's "Expedition Bigfoot," an elite team of researchers plugs the reported sightings into an advanced data algorithm to narrow its search for the elusive creature to an area in central Oregon. The eight-part series tracks the teams as it treks into the deep woods hoping to find evidence of the cryptid. "Travel Channel has assembled the very best team of experts in Bigfoot lore and science to give us proof of the creature's existence once and for all," said Matthew Butler, general manager, Travel Channel. "The journey is formidable, and the jeopardy is real. Skeptics and believers alike will both agree the trek this team makes is something they have never seen before."