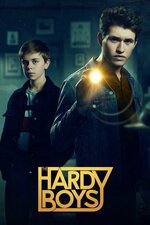 After the tragic death of their mother, Frank and Joe Hardy's father relocates the boys to their mother's hometown while he tries to solve the case, but the boys want answers as well.