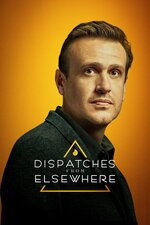 "Dispatches From Elsewhere" is an anthology series from creator and star Jason Segal. The story centers around four ordinary people - Peter, Simone, Janice, and Fredwynn -- who are brought together by chance after they all respond to a flyer. Feeling as though something is missing in their lives, the characters are drawn into a game that unfolds in a serpentine series of events, taking them from parades to shareholders' meetings. As they piece together the puzzle to find a path forward, they come to delve deeper into a mind-boggling mystery hiding just behind the facade of everyday life and their eyes are opened to a world of possibility, whimsy and wonder. The 10-episode series features an ensemble cast including Sally Field, Richard E. Grant, André Benjamin, and Eve Lindley.