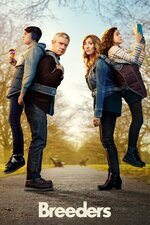 "Breeders" explores the paradox experienced by nearly all parents, the willingness to die for one's children coupled with the near-constant desire to kill them. Paul is a caring father who discovers he's not quite the man he thought he was. His partner, Ally, runs a recording studio, makes Paul laugh and has the ability to read a story to their children while she's technically asleep. In this honest and uncompromising comedy, Paul and Ally are juggling full-time careers, aging parents, a mortgage, upheavals in their relationship and the unenviable curveballs of parenting their young children, Luke and Ava. When Ally's estranged father Michael appears on their doorstep, the family essentially takes on a third child three quarters of the time, but this one comes with baggage and opinions. Paul's own parents, Jackie and Jim, are on hand to help out, but their generation does parenting a little differently.