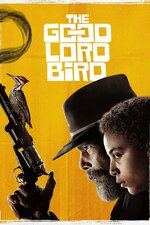 Based on the award-winning novel by author James McBride, "The Good Lord Bird" is told from the perspective of Henry "Little Onion" Shackleford, a newly freed teenager who joins abolitionist John Brown on a holy crusade to end slavery. Onion encounters Frederick Douglass and Harriet Tubman, and he finds himself as a part of the famous 1859 raid at Harpers Ferry. "The Good Lord Bird" is equal parts absurd and tragic as it spotlights the ever-changing racial, religious and gender roles that make up the American identity.