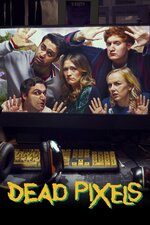 Where can I watch Dead Pixels online?

Locally, you can stream and watch Dead Pixels online on Vudu. Please note, Vudu is a Buy streaming service and you may need to register or provide your existing Vudu login to watch.

Meg, Nicky and Usman are friends who share an obsession with a fantasy role-playing game game Kingdom Scrolls. "Dead Pixels" follows their lives and their friendship both in the real world and online. Jase, the newest recruit at Meg's office, is not only irritating but also very bad at the game, a big problem for Meg, who otherwise might have a crush on him. Together the group defends their castle and crush orc invasions, but over time find themselves forced to engage more and more with the real world through new gamer Russell.