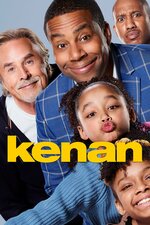 Kenan's a local Atlanta TV personality and single father working hard to balance his career as the host of "Wake Up With Kenan," a popular morning show, with raising his two spirited school-age daughters. But juggling his job and family proves difficult when his friend Mika is his tenacious producer, his brother Gary is his clueless manager, his father-in-law, Rick, is his toughest critic -- and everyone who thinks they're doing their best to make his life a little easier seems to make it a whole lot harder.