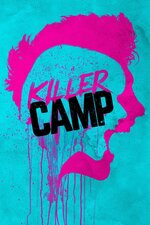 Killer Camp is now available to stream and watch online:

A group of unsuspecting happy campers are scared out of their wits, in a twist that none of them see coming. In the run up to Halloween, a group of people attend a summer camp like no other. They think they have signed up for a summer of fun, but things quickly turn deadly when one of them is struck down by a killer in their midst. If they are to survive the "Killer Camp," the campers must identify who the killer is before they too are targeted. One by one, the contestants are killed and eliminated as the campers and killer battle it out for a cash prize.