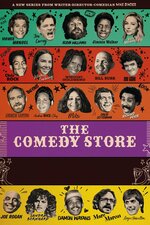 A five-part documentary series that chronicles the evolution of comedy within the walls of a Los Angeles club called Mitzi Shore's Sunset. "The Comedy Store" brings to life the legends, heartbreak, and the history that were created at The Comedy Store over the last 47 years. Former stand-up comedian, Mike Binder, highlights one of pop culture's greatest practices of comedy with never-before-seen, archived footage and incisive, emotional interviews with some of the greatest and biggest names in comedy.