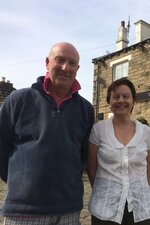 Four in a Bed

Graham and Barbara Yellow pride themselves on offering basic facilities for great value for money at the White Swan Hotel in Yeadon, West Yorkshire. Richard Tuke and Susan Hatch find some hairs out of place in their room, while spiritual couple Malcolm and Fiona Piers-Taylor get good vibes from being in room number four. Over dinner, Graham and Barbara relax into their roles, leaving Rachel Lonergan feeling guilty about having labelled them as game players.