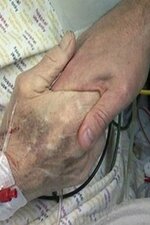 Reginald, 78, is dangerously ill. He woke up with severe stomach pain, and the A&E team have concluded that his condition is life-threatening, but can they save him? Other patients include Richard, who has twisted his knee moon-walking in a club, and a young cyclist brought in unconscious after coming off his bike.