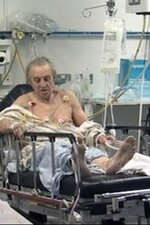 Omar, 88, is brought in after suffering severe stomach pains and a suspected abdominal aortic aneurism, also known as a triple A. Meanwhile, Hanny, 33, is rushed in after attempting to take his life with a lethal cocktail of drugs, and during the hectic few hours when the A&E is inundated, staff fight to save an 18-year-old who's been stabbed in a street fight and has lost a life-threatening amount of blood.