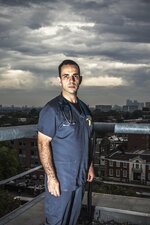 A Time to Laugh

In this episode filmed on Red Nose Day, Dilson is rushed in by ambulance with severe knife wounds after being repeatedly stabbed in the head and neck as he tried to stop a fight outside a nightclub.