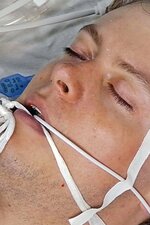 Corey, who's 27, is rushed to St George's after suffering a cardiac arrest during a game of ice hockey. His brain has been deprived of oxygen for over 25 minutes and doctors put him in an induced coma to prevent further damage to his major organs.