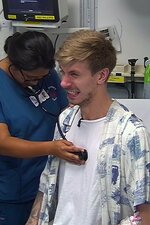 88-year-old Hasuben is rushed in having been found collapsed and unresponsive at home. Law student Jamie has a condition called pectus excavatum, which causes his ribs to grow in an inward direction. A 23-year-old bar tender and dad-to-be called Robert is in A&E after a beer barrel fell on his leg.