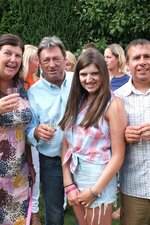 In the final episode of the fourth series, Alan and the team transform a garden in Cumbria. Alice Pyne fought Hodgkin's disease for over five years until her death in January 2013. Determined to live her life to the full, she drew up a list of ambitions that she wanted to achieve. Her story captured the public's imagination worldwide, and top of her list of ambitions was getting more people to sign up to the bone marrow register.