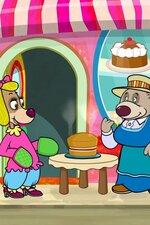 Pip and friends are playing in the playground with young Alan enjoying the seesaw so much he will not go on anything else! When the gulls drop something heavy on the opposite end of the seesaw Alan is catapulted out of the playground.