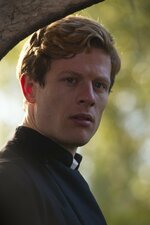 Sidney has just spent a glorious morning in the company of the woman with whom he is secretly in love, Amanda Kendall. Racing to church, Sidney arrives just in time to conduct the funeral of a local solicitor - a death which appears to be the result of suicide. As Sidney begins to uncover evidence that the suicide was staged, his own world is shaken apart when he receives news that Amanda has got engaged.