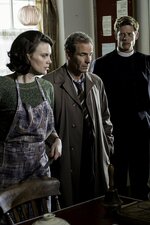 When Theo Graham confesses to Sidney and Geordie that he attacked and killed his landlord Eric Whittaker, they rush to the boarding house and find the alleged victim alive and well, along with his teenage daughter Joan and her stepmother Vivian. Back at the station, despite his protestations that Eric will come after him, Geordie sends the young man on his way. Just hours later, Eric is killed in a hit and run as Sidney and Geordie look on.