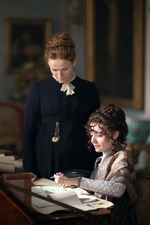 A drama telling the story of Anne Lister, 1791-1840, a Yorkshire landowner, industrialist, traveller and diarist. She was a lesbian who kept her orientation secret from society at large but in private defied convention by living with her female lover. Anne kept an account of her life, loves and emotions in a fascinating and painfully honest 4,000,000-word journal.