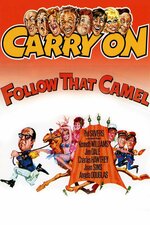 Add to my Watchlist
Find out where to stream and watch Carry On: Follow That Camel at the UK Streaming Guide

Comedy about a young English aristocrat who, unjustly disgraced by accusations of cheating, joins the Foreign Legion and comes across a Bilko-like sergeant with a fort full of nervous legionnaires. With trouble brewing, the new recruit is forced to show his mettle and, hopefully, win back the heart of his lover.