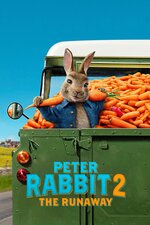 Find out where to watch Peter Rabbit 2: The Runaway tonight at the UK Streaming Guide

Despite his efforts, Peter can't seem to shake his reputation for mischief among the other rabbits. Once he adventures out of the garden Peter finds himself in a world where mischief is appreciated, but soon his family come to bring him home.