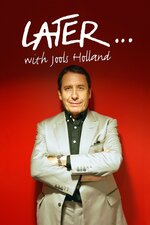 Find out where to watch Later ... with Jools Holland tonight at the UK Streaming Guide

Jools Holland has introduced hundreds of established and new musical artists, from solo performers to bands and larger ensembles, since this programme debuted on BBC2 in 1992. It's still going strong, with millions of fans around the world enjoying the hour-long episodes. `Later...' features multiple songs by each guest, and Holland, a founding member of the band Squeeze, interviews one or more of the performers and frequently jams with them.