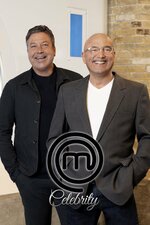 Where can I watch Celebrity MasterChef in the UK?

In the UK, you can stream and watch Celebrity MasterChef on Please note, is a streaming service and you may need to register or provide your existing login to watch.

Celebrities take their turn in the kitchen in this edition of `MasterChef.' Sixteen well-known figures in the worlds of sport, music and show business take up their aprons and do battle for the title of Celebrity MasterChef. Each week, four celebrities compete, facing a series of tasks that are designed to assess their culinary prowess. Popular challenges from the main `MasterChef' series, such as the Mystery Box Challenge and the Mass Catering Challenge, are called into action to test the celebrities.