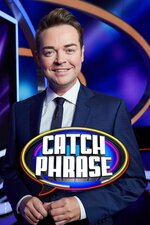 `Catchphrase' is the STV Productions reboot of the similarly named show presented by Roy Walker and Nick Weir. In this game show, presented by Stephen Mulhern, contestants try to identify familiar catchphrases based on computer animations - usually featuring the show's animated mascot, Mr Chips - shown on an on-stage screen. The animation is initially covered by nine squares, which are taken away one at a time to slowly reveal the cartoon. Several puzzles are played to determine the winner, who advances to the bonus round for a chance to win a cash prize.