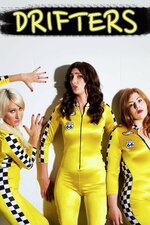 The six-part comedy series follows three best friends living in Leeds who've graduated, had a year out and are struggling to find jobs that don't stink, a place to live that isn't a dump, and boyfriends they actually like. The show captures the very funny, very humiliating experiences of Meg, her eccentric cousin Bunny and their friend Laura as they discover that life might just be a bit tougher than they had imagined. `Drifters' is written by Jessica Knappett, who also stars as Meg. Knappett says one of her top tips on how to coast through life as a drifter is: Make sure you do everything you possibly can to keep running from your future/major life/career decisions. Ideally this should involve taking out a loan and travelling to another continent to spend it there.