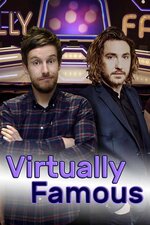 When Andy Warhol famously predicted that everybody would be famous for 15 minutes, he probably didn't know how right he would end up being thanks to such innovations as YouTube. This comedy panel show highlights viral favourites that have brought fame to their otherwise-unknown stars. Actor Kevin McHale - who has a legitimate claim to fame as a star of musical comedy series `Glee' - presents the programme, joined by comedian Seann Walsh and radio personality Chris Stark as the captains of teams that compete for points in a series of witty and upbeat rounds. Twitter rants, YouTube videos and Vine clips that have been seen by millions of people are the inspirations for the challenges that the teams face. `Virtually Famous' also features appearances by the creators of some of the Internet's most popular content.