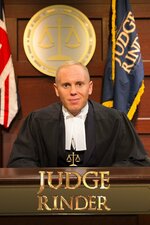 Where can I watch Judge Rinder in the UK?

In the UK, you can stream and watch Judge Rinder on Please note, is a streaming service and you may need to register or provide your existing login to watch.

In a format similar to popular American show `Judge Judy', small claims cases are adjudicated in a studio courtroom presided over by criminal law barrister Rob Rinder. Each programme sees three different cases brought before the judge, who questions claimants and defendants, speaks to witnesses, assess the evidence and makes judgements. He also reserves the right to throw the case, and the people, out of his court! Called in 2001, Rinder at his legal practice focuses on international fraud, money laundering, and other forms of financial crime, a long gavel throw away from the cases he judges on TV.