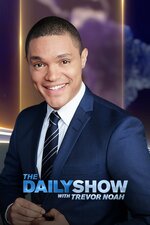 The Daily Show with Trevor Noah

Trevor Noah takes on the very tall task of replacing longtime host Jon Stewart on Comedy Central's Emmy- and Peabody Award-winning talk/news satire programme. Noah joined `The Daily Show' in 2014 as a contributor, two years after making his U.S. television debut on `The Tonight Show With Jay Leno'. The native of South Africa - born to a black South African mother and a white European father - has been lauded for his unique, insightful take on current events and ability to sell out international comedy shows. It's also helpful that he is, in the words of his Comedy Central boss Michele Ganeless, "wickedly funny".