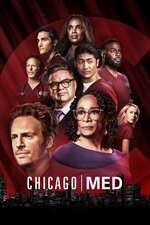 Where can I watch Chicago Med in the UK?

In the UK, you can stream and watch Chicago Med on Please note, is a streaming service and you may need to register or provide your existing login to watch.

Executive producer Dick Wolf adds another Chicago-centric series to his roster, this time focusing on the city's most explosive hospital and its staff of doctors and nurses -- a world first glimpsed in the `I Am the Apocalypse' episode of `Chicago Fire'. Relationships are forged in the chaos of the emergency room, where the team tackles cases inspired by topical events. Familiar faces from the city's police (`Chicago PD') and fire departments make appearances on the series.