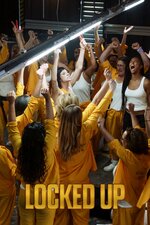 `Locked Up' is a Spanish crime-drama following a middle-class young woman who is set up by her lover and boss for corporate fraud. Macarena Ferreiro finds herself locked away in a high-security women's prison after being framed, while the real perpetrator walks away with the stolen money. With ruthless criminals surrounding her, she struggles to deal with prison life but manages to find a friend in fellow cellmate Yolanda. Other prisoners threaten her safety as the jail's most dangerous inmate, Zulema, takes an interest in the newcomer.