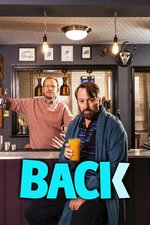 Back is now available to stream and watch online:

Watch episodes of Back online:

One of the United Kingdom's most famous comedy duos, David Mitchell and Robert Webb, return again for this comedy series. The long struggle for control of the family pub between the two foster brothers, Stephen and Andrew continues and rivalries remain just as bitter as ever before. Stephen returns to the John Barleycorn feeling rejuvenated from some time away, only to find that Andrew, struggling under both the pressure and mundanity of landlording, is feeling restricted by his new responsibilities.