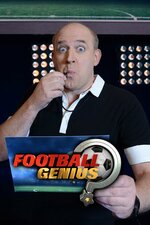 `Football Genius' is a football-themed quiz show presented by stand-up comedian Tim Vine. Two teams of mega-fans, led by Paul Sinha from `The Chase' and Olympic champion Sam Quek, must play each other in a virtual football match, answering questions related to the beautiful game in order to win. In each episode, two fan-favourite teams will be featured. In the first episode of this series, West Bromwich Albion will face Wimbledon. At the end of the series, only one manager can emerge with the `Football Genius' trophy.