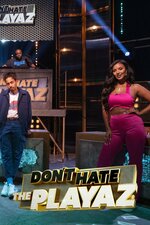 `Don't Hate The Playaz' is a hip hop comedy entertainment show filmed in a gig-environment and hosted by Jordan Stephens. The two teams are made up of comedians, hip-hop legends and celebrity hip-hop lovers, who battle it out in front of an audience with DJ Shortee Blitz on hand to drop the tracks live. The two teams are led by Maya Jama and Lady Leshurr with London Hughes as a regular and new guests on the teams each week.