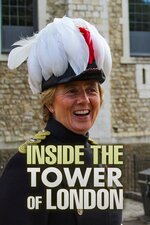 Inside the Tower of London

One of Britain's most iconic landmarks, during its 950-year history the Tower of London has been home to kings, traitors, bureaucrats and exotic animals, and has stood constant as part of London's skyline throughout the plague, the Great Fire and the bombs of the Blitz. In the present day, its only residents are the Yeoman Warders, known as `Beefeaters', who work within its walls and act as guides for visitors. In this series they allow cameras to explore areas usually off-limits, and explain both the most famous and lesser-known aspects of the Tower's long history.