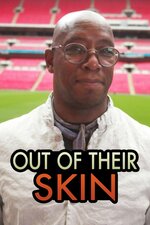 Out of Their Skin

In this candid portrayal of British sporting history and social culture, documentary `Out of Their Skin' charts the rise of black football players in Britain. The emotive narrative, presented by former Arsenal player Ian Wright, captures the true essence of sportsmanship and marks the 40 years since Viv Anderson became the first black footballer to win a full cap for the England national team. Yet, while it shows great strides have been made in the game, the documentary is not shy to acknowledge what still needs to be done both on the field and off to secure a future in football that is not clouded by racism nor judgment.