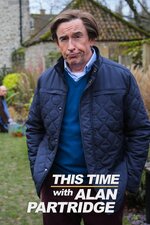 This Time with Alan Partridge

Steve Coogan returns as the comedic television personality, Alan Partridge. After being offered the career opportunity of a lifetime to present a weekday magazine show on the BBC called `This Time', alongside co-presenter Jenny. Alan fears that this may be his last-chance to make it in broadcasting, so he grasps the opportunity with both hands, often resulting in hilarious consequences. The series is written by Steve Coogan, Neil Gibbons and Rob Gibbons.