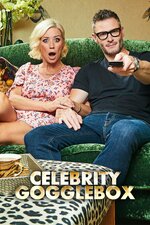 After the success of 2018's `Gogglebox' celebrity special for `Stand Up to Cancer', Gogglebox returned to the screen with a celebrity version. Some of Britain's most recognisable faces share their sharp, insightful, funny and emotional views on popular and topical TV shows. Celebs become opinionated viewers on everything from Saturday night entertainment juggernauts to the week's biggest news stories, with famous faces from across Britain's cultural landscape, featuring musicians, reality stars and athletes.