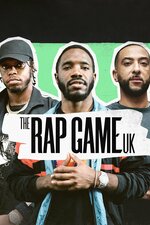 Based on the successful series in the United States, in `The Rap Game UK' UK rap legends DJ Target, Krept and Konan pit six unsigned MCs in a head to head battle, with the winner becoming the first ever signing to Krept and Konan's record label, Play Dirty. Each week the artists are given two tests in which they will be asked to drop the hardest bars, showcase their song-writing skills, and demonstrate masterful stage presence, all while being trained and mentored. During this time, the artists live together in Birmingham for thirty days, writing, practicing and performing, as they compete to change their lives.