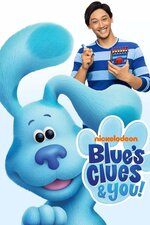 Add to my Watchlist
Find out where to stream and watch Blue's Clues & You! at the UK Streaming Guide

Josh follows up on clues from his dog Blue and her friends to solve puzzles and problems. In addition to Tickety Tack, Shovel, Bucket and Magenta, friends also include Monsieur Salz, Madame Pfeffer and their children paprika and cinnamon.