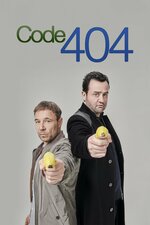 Detective Inspectors John Major and Roy Carver are the pride of the Met Police's Special Investigation Unit. After a botched undercover sting operation results in the death of DI John Major, the Met Police feel shaken and fear for the unit's ability to function. This leads to Major's body being put forward for an artificial intelligence project that would bring him back from the dead. While the experimental project appears to return DI Major to life, Carver increasingly notices that something is amiss.