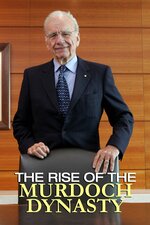 The Rise of the Murdoch Dynasty

Playing out on a canvas of exclusive parties, tabloid newsrooms and private dinner meetings, this series presents a unique portrait of some of the most iconic and infamous moments of British political history in relation to one of the world's most influential figures: Rupert Murdoch. Using rarely seen archive material to shed light on Murdoch's private world, this series pieces together the dramatic story of how Murdoch built his revolutionary empire, including the scandals that almost brought it crashing down.